The European Court of Human Rights (ECtHR) today (see below) informed the Greek Helsinki Monitor (GHM) that it communicated to Greece the application submitted by GHM as a representative of Polina (Pelagia) Papanikolaou against the compulsory registration of religion in birth registration acts (in the case of her daughter) prescribed by law, which the applicant and the GHM consider a violation of religious freedom (Article 9 of the ECHR). The ECtHR accepted the applicant’s request that the application should be given immediate priority, as a new registration act will have to be issued with the given name with a reference to the daughter’s religion again in violation of religious freedom. The ECtHR also considered the application to be potentially a leading case. Finally, for the first time in its history, the ECtHR invited the Data Protection Authority to intervene as a third party.

GHM recalls that after a series of applications that led to convictions of Greece between 2008 – 2013 (Alexandridis v Greece and a group of three appeals Dimitras etc. v. Greece), in 2012 the registration of religion in criminal courts was abolished, while a choice between a religious oath or a civil affirmation was adopted initially, to be replaced, in 2019, by only a civil affirmation. 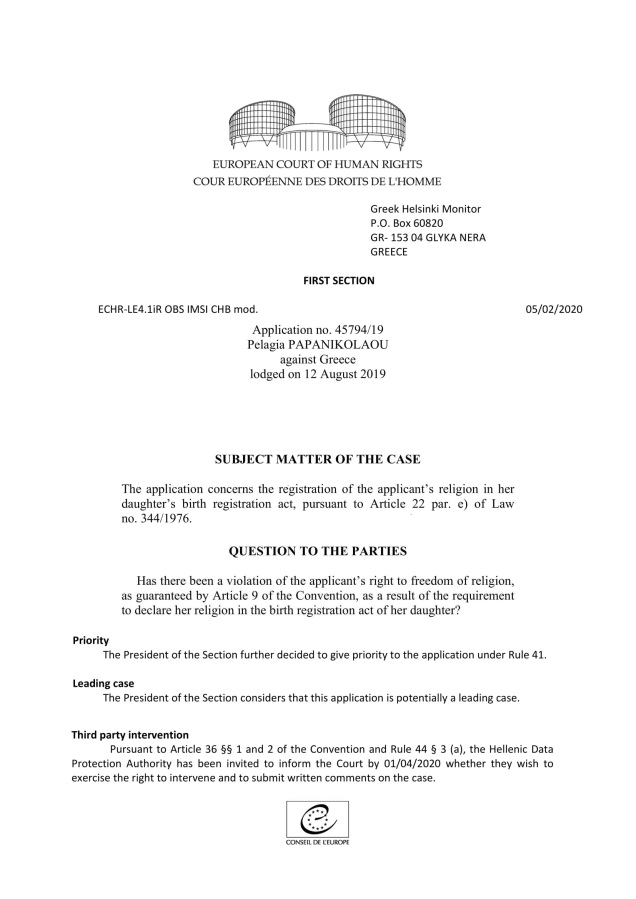